Well, it was a very nice weekend.  I’m mostly here to post a few pictures, as usual; anyway it’s still early and I’m having a bit of trouble forming complete sentences.  Still working on my coffee…..

Friday, we went to the symphony.  It was all great until the last piece, Debussy’s La Mer (should the name of a song be italicized, or put in quotation marks?  I am too sleepy to google it right now) —- which was absolutely amazing.  You could feel the sea breeze and the waves and hear the birds and feel the sunshine and clouds – oh it was lovely.

On Saturday, Mike and Mar came over and we played a few games and had a few beers — I had a lot of fun and think everyone else did too.  After they left, Stephen and I went to the grocery store to pick up some food for dinner, which was magnificent; we made coc au vin with Riesling and herbs — omg it was amazing.  Also made grilled asparagus, and Stephen whipped up some hollandaise sauce which was quite delicious.  All that with some baguette, and we ended up being able to finish the asparagus, a piece of bread, and about half of a chicken breast each.  I also started on this cake on Saturday, which I finished yesterday.

This is a half-recipe, because you’re supposed to bake these in a Pullman pan, which I did not have (and still do not, though I found a $5 one online and ordered it…).  But I think it worked out ok.  It’s not the straightest cake ever, but it’s still pretty cool-looking!  I think I put too much ganache inbetween all the pieces, but this was a practice cake so meant for learning.  Which I did!

Yesterday we went to Fido for breakfast and coffee, and then drove out to Cummins Falls.  It was a LOVELY day to spend on the rocks at a waterfall.  The water was a tad too cold for swimming (although that did not stop some of the people who were there), so we mostly sat around on the rocks for a few hours, enjoying the flung spray and the blown spume (to quote John Masefield).  Was such a wonderful way to spend a sunny spring Sunday – I highly recommend. 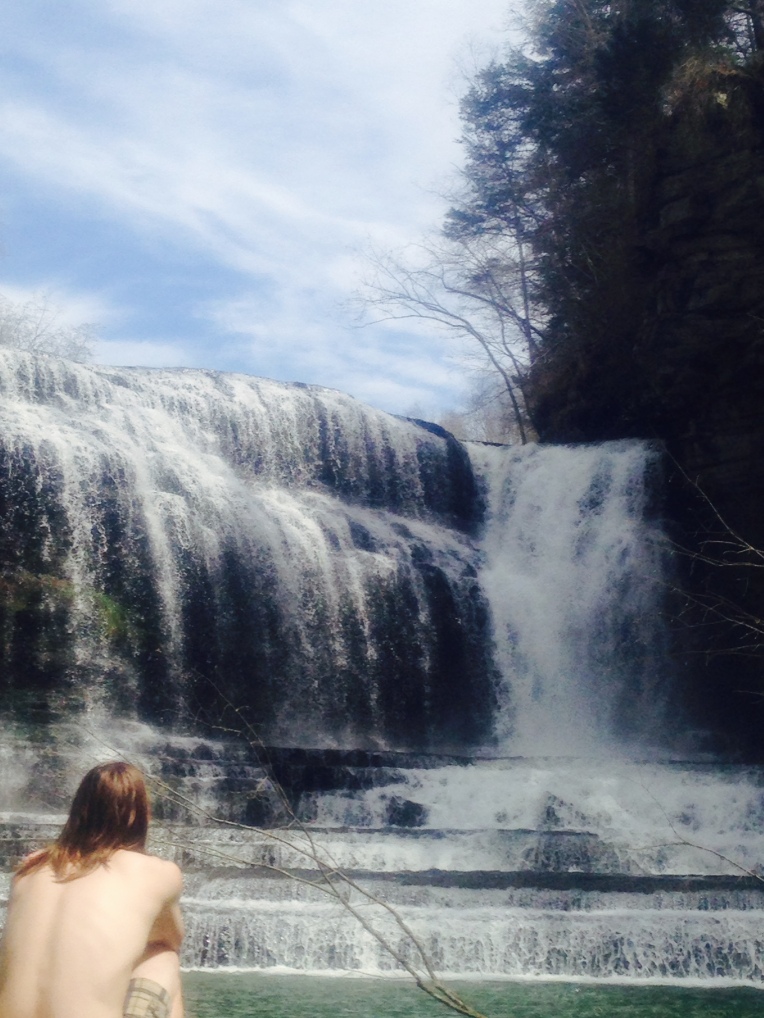