Made that mac and cheese last night, and just wanted to tell you about it a little.  It ended up being delicious, of course, although I wish I’d added a tad more liquid as it ended up being really thick and creamy.  Which is kind of ideal, except that I used linguine and I like to cook the noodles a tad softer than al dente (I’m sure there’s a word for it) – so they were not all able to bear up under the weight of the sauce when it came to transferring them from fork to mouth.  Nevertheless, that does not affect the taste.

So the recipe called for sweet potato puree, brie, cheddar, neufchatel, and milk.  I added onions and garlic, because I add them to everything, and I also had some bacon left from brunch last weekend which I fried and added as a garnish.  And man it was soo good.  Served with salad and baguette — mmm. 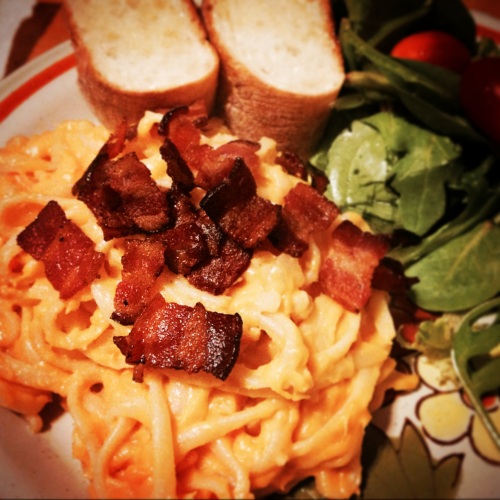 After, Cathy went home and I watched most of V for Vendetta, though turned it off when I got tired which happened to be RIGHT before the climax.  Oh well, I’ve seen it before.  I know what happens.

I’m posting a picture of my current leather project, because I want to, because I think it’s turning out pretty well (not done yet, obviously).  As long as all goes well, this will be a Christmas gift for someone, but, uhm, assume it isn’t for you.

I encouraged someone on reddit to buy a leather burning kit, and she did, and just sent me a picture of some doodles this morning.  Maybe I’m posting this here because I really wanted to send it to her, but don’t want to come off as a show-off.  Not that it’s that good.  But…..it’s not a complete mess.  It’s decent.  Actually I think it’s kinda cool-looking.