I know, I’m terrible at titles.  The equinox is on my mind though, because I just got back from my lunch break and am saddened that I can’t spend the rest of the day outside.  That said, the mere fact that it’s beautiful outside and that fall is coming improves my mood (which is stupid as it has no actual affect on my afternoon whatsoever – I can’t even see out a window without standing up).  That one tree on Bagleyshop which always turns yellow while the rest of the trees are still dark green has started shedding leaves, which makes me happy.  So, so beautiful.  I love fall so much.

My lunch break was productive, though I again neglected to get any actual lunch (good thing I have an apple left from Friday…).  I went to Costco to pick up a couple of prescriptions, and then went to Old Navy where I got some pants (um, I don’t know why I’m hesitant to admit this, but they’re skinny pants) and was pleased to be able to fit into a size smaller than I typically get.  Which is especially odd, given the fact that they’re the skinny cut.  But whatever, not complaining, just thinking that I should lose some more weight.  I don’t actually feel like I’m losing weight at all though, so I’m really assuming this is a fluke – or the brand.  (Although, most of my jeans are this brand, so I don’t know what’s up.)

But yeah anyway, I wanted to get some – even though my calves are about as big around as, um, my head – so that I could use them as a template to alter some of my work pants.  All of which are baggy and make me feel like a slob; a few are baggy everywhere, and a few are just baggy in the waist area.  Instead of buying new clothes for work (blah), going to see if I can adjust these myself.  Good thing I know how to sew!!  (Ha!  That’s a joke you won’t get unless you know how complicated it is to sew clothing — it’s so much more involved than sewing quilts.  Even when you applique and then hand-quilt them.)

Had a good weekend.  Went to a free Over the Rhine show on Saturday with Stephen, a couple of his friends, and his sister/brother-in-law.  Had Prince’s hot chicken for the first time, and it was really really good – the seasoning on the mild was delicious, and the really hot stuff was a bit hot for my taste but I’d be interested in trying something in-between.  Fortunately/unfortunately, Hattie B’s is literally 10 minutes from my house so doubt that I’ll be trying more Prince’s any time soon.  But, ya know.  Funny – was listening to Wait Wait Don’t Tell Me yesterday, and they took a call from someone in Nashville.  The first thing the host said was something about hot chicken, to which the caller replied that she was a lifelong vegetarian.  It’s nice when you hear about non-embarrassing Tennesseans on NPR.

So anyway, in addition to having Prince’s for the first time on Saturday, I also went to the Pharmacy for the first time.  I really liked the place overall, and if/when I got back I want to try their burger that comes with mushroom stroganoff bechamel, but to be honest I thought Fat Mo’s regular burger was better than the regular Pharmacy Burger that I ordered.  (Bun quality was better at the Pharmacy, though.)  I will say that they had some amazing-looking sauces, and the curry ketchup I got on the side was amazing.

Sunday was a pretty typical Sunday – which basically means that I spent most of the day trying not to feel bad about how lazy I was!  Ha.  I got up and took a walk around the neighborhood (in lieu of hiking, as I slept a little later than I’d meant to), then did some laundry and washed some dishes and cleaned the living room.  Oh, also hung some pictures on the wall in my bedroom but I can’t decide whether I like them or not.  That wall has been difficult to find appropriately-sized pictures for.  Most of the rest of the day was spent watching TV/reading entire issue of the Sun that came in the mail on Saturday/playing Skyrim…….until I met Ryan at the Brewhouse for a couple of Blue Moons, and then went to Stephen’s later.  You know, when I write it all down like that, it was actually a pretty fantastic Sunday.

Speaking of Skyrim, I ordered this shirt which came a couple of days ago.  (Oh yeah, no way I’m losing weight as this shirt is a XXL — which I assumed would look like a dress on me, but I guess not.) 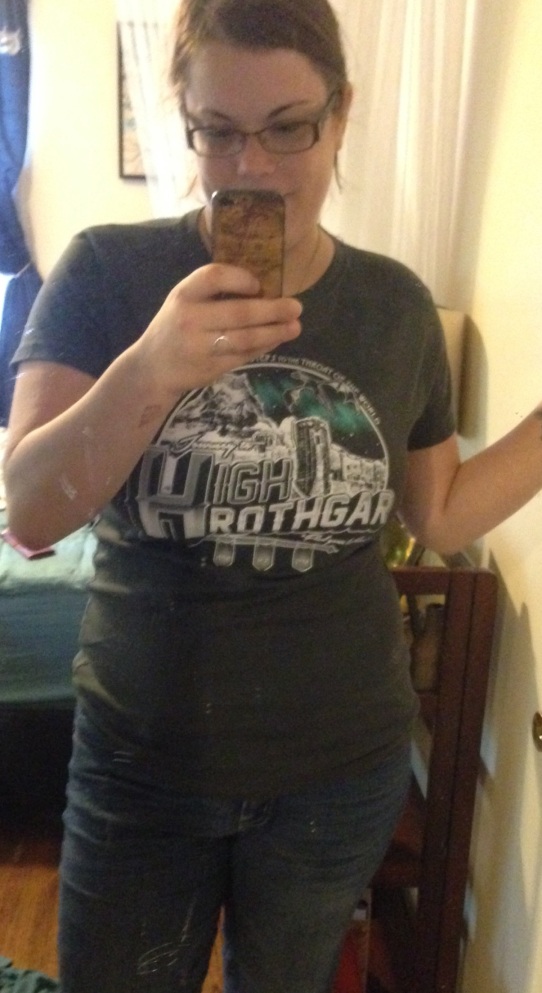 I guess you probably can’t read it – but it’s basically a tourist ad for High Hrothgar and the Seven Thousand Steps.  Which…. would not be my #1 destination for a vacation in Skyrim, but can you imagine standing at the Throat of the World — what an amazing view!!!

Well anyway, I think that’s all I have to say, I guess.  What a feeble ending.  Need to work on titles and conclusions.