Thursday right?  Yes, yesterday was Wednesday.  (Arithmetic, you see, is very useful; without it I should hardly have been able to …guess the day….ok ok that’s not even applicable, but I just felt like throwing that line in.)

Stopped off at Pilot this morning for coffee and a breakfast-y thing, and the coffee is probably 3/5 Columbian, 2/5 hazelnut.  I meant to make it 50/50.  Oh well, no big deal.  Noticed that they have Pumpkin Spice coffee now, but did not get any.  Not the biggest pumpkin fan, unless we’re talking about muffins.  Mm, now I want to make pumpkin muffins.

So I decided I was in a tomato-soup-and-grilled-cheese mood yesterday, and had just recently been given a bunch of cherry tomatoes, so I made a creamy tomato basil soup with fresh mozzarella (and more tomato and basil on the sandwich) grilled cheeses.  I was pretty happy with the way they both turned out!  I did not seed the tomatoes but they just added an extra crunch to the soup.  I think that one of my biggest hang-ups with regards to making soup is that so many of them have a puree-ing step, and since I keep my blender and food processor in the garage, it’s….a deterrent.  Stephen keeps his blender out on the counter though, which is much more easily-accessible than mine.  Sometimes I think I should re-arrange my kitchen so that my appliances are all easier to reach.  Then I start mentally complaining about how small my kitchen is, and THEN I remember that my kitchen is actually a decent size and that i should shut up.

So I got a gift card that I can use for ProFlowers, and I also get a discount with them through Lipscomb, so I’m thinking about sending myself flowers on October 1st (anniversary flowers, if you can call them that).  That’s a good idea right?  I mean it’s unlikely that I’ll wake up that morning and not think about the fact that I got married that day 4 years ago, although I’m not sure how to expect myself to feel about that.  Hmm.  Conversely, I could just go to Costco for flowers and save $50, but then I wouldn’t get them delivered.  Hmmmmm.

Oh yeah, I renewed (questionable word choice) my Costco membership which had lapsed several months ago for basically $35, which is a great deal especially since the whole package comes with stuff like a free rotisserie chicken, and other coupons which I’m unable to list as they have not come in the mail yet.  Mostly I’m excited about being able to buy flowers and books and movies that I don’t need.  Woot!  Oh and I should for sure start getting gas there again, too…..

Tonight, I’m going with Stephen to see Victor Wooten play with the NSO.  They’ll be doing some other pieces too, but I’m excited about seeing VW.  Stephen said he’s probably wearing a suit though, so that means I should try to look presentable.  I’m going home on my lunch break to figure out what the hell I should wear.  I’m tempted to just wear a black dress because, why not, but we’ll see.

Finally  made myself a “classical music” playlist since I can’t shuffle by genre on my phone (grumble).  So far have listened to  Chris Thile playing Bach, les Demoiselles, and now Arvo Part.  Would really like to be cranking this shit, but alas, I bet someone would complain.  Since these folks like to listen to country music around here.

Have I complained here about my Asian neighbors yet?  No, don’t think so.  Long story short – I seem to have inadvertently volunteered to try to help this lady get a job.  That’s not really quite right — what I did was try to help her one day, but she keeps coming back like a stray cat looking for food that I don’t have.  It’s getting pretty damned annoying, honestly, because she seems to think that I can somehow get her a job, even though the thing that’s holding her back is 1) language skills (she doesn’t speak English very well AT ALL) and 2) no car.  Neither of which am i prepared to help her with. 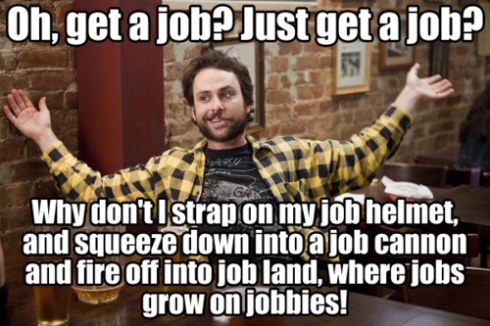 I felt that was appropriate.  Anyway, she really wants me to call the GM at O’Charley’s where they are apparently now hiring, because she thinks that even if she can’t call him and be legible over the phone, somehow it’ll be fine for no one to be able to understand her if she’s working there.

Anyway, I tried to help and I really don’t think I can do anything else.  She needs to start looking for a job within her circles, instead of asking random neighbors for help.  When she first approached me, for all I knew she was practically living on the streets or prostituting herself and really needed help getting back on her feet.  Since then, i have discovered that this is not really the case, so I don’t feel that much obligation.  That said, going to ignore her from now on.  If she can’t take a hint, that’s her problem.

Man I love It’s Always Sunny.  That line about jobs growing on jobbies makes me laugh every time!!

Well anyway, I’m out of even mildly interesting topics, it would seem.  Oh well.