But why do people post pictures of their feet on Facebook?! So what if the beach background is beautiful? I believe that you’re there – I just don’t want to see your ugly feet too!

I know I keep talking about my bedroom…and I finally finished it yesterday! I’ll probably put up some art and maybe some different curtains (I’m thinking blue), but overall everything is done! I LOVE the comforter. I slept there last night – not the first time alone, but the first time alone with no one else in the house either. 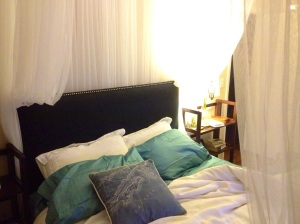 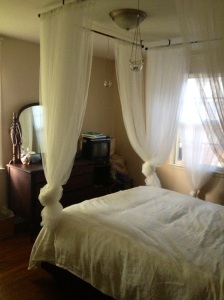 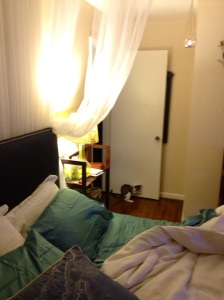 Oh pretty!! I know the canopy seems a little over the top, but it’s my bedroom after all.

Also, today is 14 weeks. These little numbers make it seem like hardly any time has passed. Even saying “three and one half months” doesn’t sound like a long time. It feels like FOREVER since I saw Matt though. February feels like it was a different lifetime.

EDIT: I’m going to have to start buying lint rollers at Costco as – after only one night – the white linen is already covered in black cat hair. I don’t know what I was thinking…except that white linen is so gorgeous.