Went to Jackson’s with two favorite people on Friday night.

On Saturday, had breakfast at Wendell Smith’s with Stephen, then went to Rhino Books where I bought three more than the one book I was “allowed” to buy (per my budget, or lack thereof).  After that we went to Centennial Park and sat at the Parthenon, reading.  It was extraordinarily bright; or anyway, it seemed that way after all the grey, rainy days we’ve been having.

Later, we went to a house show, and when we got home made cocktails with gin, crushed garlic, and pepper.  It was a full and good day. 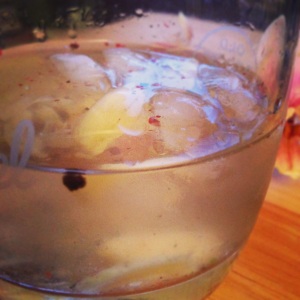 Sunday, we went to Fido and then Village Pub where we mostly read, sometimes talked, and did some writing/watercoloring. 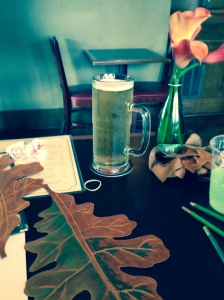 After Village Pub, we went to the Frist to see their exhibit closing yesterday — the Art of the Dominican and Franciscan Orders.  Then to JJ’s for a caffeine pick-me-up before heading to a birthday party that one of Stephen’s friends throws for Mozart every year.  The concert featured a lot of Nashville Symphony players and was really excellent.  I was fairly exhausted but really enjoyed the music nevertheless.

Whether it was the late afternoon coffee or something else, neither of us slept very well last night, but nevertheless — it was a good weekend.  I’m looking forward to being chill the next few days, though.