I was supposed to work today. I went in on time, but have been experiencing mild chest pain/discomfort for a couple of months now and this morning it got so disconcerting that I called Mark to see if he could work the rest of the shift for me so that I could go to the doctor. He came in around 9:00 and I went to a walk-in (since my stupid employer changed our health insurance providers… again… and I have to find a new primary care physician… again). (BTW, this does mean that I’m not off tomorrow anymore, which is fine.) After describing my symptoms and having my vitals taken, I was told that the chest issues are being caused by bronchial spasms! Phew, not going to have a heart attack. I mean, I kept telling myself over and over again that my heart is perfectly healthy; I’m young and not overweight, I exercise (sometimes), my EKG and chest x-rays were normal, my blood pressure is always normal, I don’t have a family history of heart disease, etc. Plus, I DO have asthma and acid reflux problems, both of which could very easily be causing chest pain. But, I just wouldn’t listen to myself. Silly me.

So, after going to the doctor, I came home and did laundry. And blogged about how silly people are to think vegetarians are unAmerican. And then I came home and watched half of Grass, a documentary (on Netflix) about the rise and fall of marijuana (or, as they spelled it in the early part of the 20th century, marihuana). Turns out that it was banned because some idiot wanted to make a nation-wide narcotics ban, so he made up stories about how smoking marihuana makes you kill people and go crazy. When both of those claims were shown to be ludicrous, he started saying that marijuana inevitably leads to heroin addiction (which no one will contest is a bad thing to be addicted to). I mean, everyone knows that once you start smoking pot, you HAVE to start doing heroin too. It’s just common sense!

Anyway, I only watched half of the documentary because Matt still wasn’t home and I needed to go to the Costco pharmacy to get my steroids inhaler before they closed.

So now I’m back, and I’m bored and hungry and Matt still isn’t home. Did I mention that he’s been working about 12 hours today? OH! Did I also mention that he got a new job? Finally!!! It’s with Travis Electric, and he’s starting out with $1.50/hour raise. Which is still less than I make, but hey! Who really cares? It all goes to the same place. He starts the job on Monday and we HAVE to buy a new car before then. So either tomorrow or Sunday. I’m thinking I’d like a Subaru just because I really like the AWD on his car, but the most important factor is money. As usual.

I’ve taken up knitting. It’s harder than crocheting, I’ve decided. I’m making a dishcloth right now that requires cabling which is not fun. At least not yet….

And now, because I’m still bored, I’m going to attach some pictures. Hope this post hasn’t been too rambly or boring.

These are the basil sproutlets (uh, I’m sure there’s a technical term) which have grown from seeds.  I really  need to repot them; they haven’t grown much in the last week and I want fresh basil!!

THIS is the jewelry tree that Matt made for me out of copper wire.  It’s kind of two trees.  Isn’t it nice?  In the background you can see my very pretty fake orchids.  The real orchid is in the other room with no flowers. 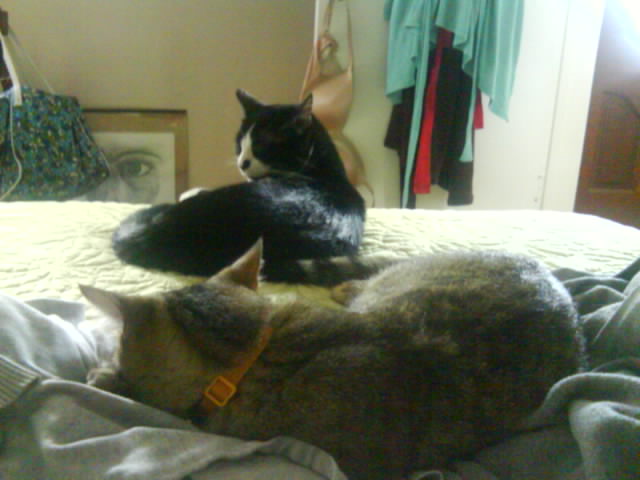 Lastly, this is immediately to my right.  Silly cats think it’s their bed or something.

I’m at Matt’s parents’ house doing laundry.  Since there was nothing interesting on TV, I was flipping through channels and stopped on Lifetime’s Wife Swap (which I think is one of the stupidest shows on TV).  However, I kind of got sucked in because Family A was your good ol’ American working-class, shoot-their-own-deer, regular Joe family.  Family B was a vegan, hippie-type family.  They swap the moms for two weeks, right?  So, as you can imagine, there was a little bit of strife when it came to meal planning.  Mom A tried to force family B to start eating meat.  She also made their teenage daughter throw away all her PETA protest signs and then told her to start thinking for herself.  THEN, when family B started trying to explain, yet again, their belief structure, Mom A got all worked up and started crying because they wouldn’t eat meat.

Anyway, it made me mad.  Mom A gets hurt and upset because Family B says everyone should be vegetarians — Mom A points out that her family can’t afford to NOT hunt for meat to supplement their meals.  She says their house payment is pretty much the same as their paycheck.  And then she goes off crying.  And the next morning, she’s trying to force the family to eat meat again.

First of all, it’s better to hunt for your own meat than to buy it.  Secondofly though, why all the animosity towards vegetarians??!!?  It’s like it’s unpatriotic or something!!  I mean, regardless of my desire to live in Europe (not so much Greece), where is it written in the annals of Being American that you have to eat meat???

Okay, I’m done venting.  Just this last question: why do people have to be so damn narrow-minded?